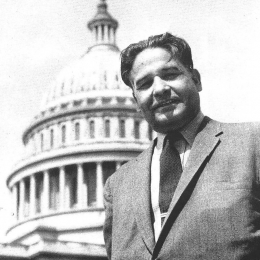 Dalip Singh Saund made history in 1957 when he became the first Asian American, the first Indian American, and the first Sikh elected to the United States Congress, serving California’s 29th District in the House of Representatives until 1963. His papers were recently donated to UCSB Library Special Research Collections so researchers can study his life and impact on history.

Born in a small village in India to a Punjabi Sikh family in 1899, D.S. Saund immigrated to the United States in 1920 to study agriculture at UC Berkeley. He became an American citizen in 1949 after successfully organizing efforts for Congress to pass a bill allowing Indian immigrants to pursue naturalization. He was a farmer, mathematician, businessman, and judge, before being elected to Congress and becoming a nationally and internationally known symbol of democracy in action.

“D.S. Saund stood as a living representative that, despite our historical struggles over race, ethnicity, and immigration, someone from a poor remote village in India could rise to a level of significant position and responsibility under the U.S. system,” said his grandson, Eric Saund, who facilitated the donation of his grandfather’s papers to UCSB Library.

Growing up in India under British colonialism shaped D.S. Saund’s political views. While in college, he supported the movement for an independent India led by Mohandas Gandhi. In the U.S., D.S. Saund frequently confronted racial and religious discrimination but he maintained his belief in the promises of American democracy.

“He epitomized the belief that the United States of America is not defined by birth or heritage of any set of people, but fundamentally is an idea that the human condition can be advanced through freedom, opportunity, and mutual respect,” said Eric.

Heavily involved in the California Democratic Party, D.S. Saund championed issues related to water rights, farming, small business, relations with Mexico, the Agua Caliente Reservation of Palm Springs, the Corona Naval Hospital, and Veterans affairs. He was a fierce supporter of the 1957 Civil Rights bill. A member of the Committee on Foreign Affairs throughout his entire House career, he embarked on a State Department-sponsored world tour during the Cold War era to highlight the freedom, opportunity, and creative spirit of the U.S. system.

The collection contains many photographs and records from the world tour as well as newspaper and magazine clippings about D.S. Saund, letters from constituents, handwritten notes, audio, 16mm, and television recordings, as well as his numerous accolades and awards.

“This collection is invaluable for students and scholars looking to understand not only Saund but also his historical and sociopolitical milieu, which spans local, state, national, and border politics, as well as South Asian diasporic history, the civil rights struggle, and the geopolitics of the Cold War,” said Dr. Swati Rana, Assistant Professor of English at UCSB, who wrote a chapter about D.S. Saund in her upcoming book.

“For my own research in U.S. ethnic literature, this is an indispensable resource for understanding Saund’s remarkable autobiography, Congressman from India, published in 1960, which charts his spectacular career and builds the literary character of Saund, refashioning this immigrant from India into a representative American.”

The Saund family chose UCSB Library Special Research Collections to be the home of D.S. Saund’s papers because of its sophisticated facilities, strong values around openness and access, and because there are already scholars at UCSB and in the UC system interested in D.S. Saund’s life, such as Dr. Rana.

“No longer just a footnote in America’s history D.S. Saund’s legacy will live on literally, for all to read from the pages of UCSB Library’s Special Research Collections,” said Cheng. “An honor so rightly deserved.”