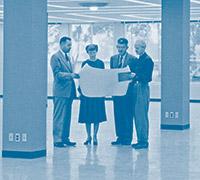 “That was the prime principle of planning: having the Library not only the cultural center, but the physical center of campus.”

Held in conjunction with the opening of UCSB Library’s new and renovated buildings, this exhibition celebrates the Library’s present and honors its past. Archival photographs from Special Research Collections trace the history of the Library from 1954 to 2016 as both a structure and a center of research, culture, collaboration, and innovation. The Library was one of the first buildings on the present location of the UCSB campus, and although technology, reimagined spaces, and student and faculty needs have transformed the Library through the years, it remains at the university’s heart.

In 1954, what was then known as Santa Barbara College of the University of California moved its operations from two locations, one on the Riviera and one on the Mesa (now the site of Santa Barbara City College) onto a 407-acre former Marine air station, which became the current campus.

The Library’s first addition (Unit II), an expansion that had been planned since 1954, was attached to the west of the original building in 1962. By then the school’s name had been changed to University of California, Santa Barbara.

An expansion (Unit III) to the south of the original Library completed in 1967 added an 8-story “research tower” to the south with book stacks and study areas. It was needed after the Regents designated UCSB a general campus of the university system, supporting graduate programs as well as undergraduates.

A 4-story addition (Unit IV) to the south of the 8-story tower included a Library Classroom, and the relocation of the Circulation and Reference desks, the Black Studies Collection, and Colección Tloque Nahuaque (Chicana/o Studies Collection). The fourth floor added significant open space and rooms for individual and group study.