Undergraduate Sydney Martin: Doing Primary Research in the Library "Made Me Change My Major" 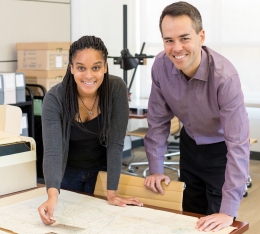 When Sydney Martin sees a World War I soldier wearing a helmet pop up on her computer screen, she thinks about the UCSB Library.

The photograph, in rotation on her computer, is part of an exhibition, “Helmets of the First World War: Battle, Technology, and Culture,” on display in UCSB Library’s Mountain Gallery through June 30.

Some of the artifacts in the exhibition, including maps, photographs and correspondence, are housed in the Library’s Special Research Collections (SRC), where they are available for scholars and students to observe and study.

“I loved Special Research Collections. I went there almost every day, even though I only had to go once a week,” said Martin, who received course credit for her work on the exhibition.

During Martin’s first year at UCSB, she took a freshman seminar taught by Lee, who asked if any students wanted to help him with the “Helmets” exhibition.

Martin eagerly volunteered, and signed on as Lee’s assistant via an introductory research class. In addition to doing research on primary source materials, Martin helped Lee select items and write captions for the exhibition.

“This project made me change my major,” said Martin, formerly an economics major. She now wants to attend law school, focusing on American history, and is interested in a career in American public policy or social reform.

Martin used primary research materials for the first time while working on the exhibition.

Looking at the “real thing” rather than a photocopy or a picture in a textbook, she said, was deeply meaningful.

“I held a postcard that someone wrote during the war, while he was going through this horrible thing. And I looked at pocket maps from World War I that people actually had in their pockets,” she said. “I was lucky enough to read their thoughts, and see their marks on the maps. It’s more intimate, and I liked that.”

While sifting through boxes of World War I papers and photographs, Martin was moved by artifacts not related to the exhibition, including a newspaper published by soldiers in the trenches to entertain themselves.

“The newspapers had poetry, games and more,” Martin said. “Even though they were living in such harsh strife, they still managed.”

Martin said she eagerly recommends SRC to fellow undergraduate students who don’t realize they can use the collections for their research.

“I tell them, ‘It’s not just for professors or graduate students. You should go to Special Research Collections if you have a research project you’re really interested in, because it’s the holy grail of sources.’”