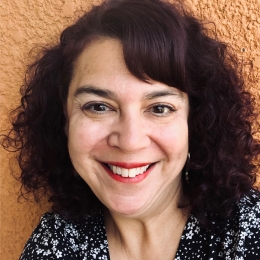 She made the move to the West Coast from the University of Connecticut, where she served for 13 years as the librarian for Latina/o, Caribbean, and Latin American Studies, Spanish, Anthropology, and Sociology, and curated their Latina/o, Latin American & Caribbean Collections.

Ramos became fascinated by history while growing up in Puerto Rico, where she earned her BA in Anthropology from the University of Puerto Rico. She was particularly interested in the question of irrigation for the island nation and the importance of water for civilizations, so she applied for graduate school at SUNY Albany, where she earned her MA in Latin American and Caribbean Studies in 1997.

While in Los Angeles trying to figure out what type of job she would pursue, she considered becoming a librarian and applied to UCLA in 1999, where she graduated with her MLIS, though ended up working initially as an archivist.

“I was looking for a job, but what I encountered was a career,” she said.

Fluent in both Spanish and English, she started working at the Los Angeles Public Library, specializing in Marine Sciences. After experiencing the large Mexican and Hispanophone community in LA, she applied to attend the Guadalajara Book Fair, one of the largest in Latin America. Ramos says that all of her experiences and degrees have honed her skills as a Latin American specialist.

Ramos’s work is not limited to the past but is also centered on current geopolitical events. Starting while she was at the University of Connecticut and in collaboration with the University of Maryland, Ramos worked with the Ricky Renuncia Project, which seeks to document the July 2019 protests calling for the resignation of Puerto Rican Governor Ricardo Rosselló through Tweets, photographs, and videos. Her hope is that this project can serve as a model others can use to document movements that play out on social media.

Ramos is also pursuing a number of projects outside of her work at the Library. She is the lead editor of a book about Puerto Rican anthropology, which began in 2016 but was delayed due to Hurricane Maria, earthquakes on the island, and the pandemic-induced financial crisis.

When released, she wants this project to be in English and challenge common outsider perceptions of Puerto Rico. Ramos is also pursuing her doctorate and hopes to complete her dissertation this year.

“My experience as a student and as a scholar helps to make me a better librarian and archivist,” she said.

Outside of her research, Ramos loves to relax with manga, science fiction, and Afro-futurism literature. She also loves spending time at the beach, hiking, cooking, and being outdoors.

After spending her first year at UCSB online, she’s most excited to meet the community face-to-face.

On COVID, Ramos said, “It’s really hard to connect with people when you’re in Zoom. It’s just not the same as eating together, drinking together, laughing… I’m finally going to be able to meet faculty, students, colleagues, and get into the life and rhythm of being on campus.”