This page is a historical record of the contents of the Alexandria Digital Library (ADL).  The ADL projects were completed in 2008.

The Alexandria Digital Library loaded the collections of many participants, including spatially indexed collections of the U.C. libraries and archives, selected California State University holdings, state and federal agency publications and private research contributions. Geographically the georeferenced holdings grew from California outward. Synoptic datasets were loaded first, followed by more detailed narrower-scoped materials. Detailed digital information at the state level is widely scattered, thus ADL focused on existing historic maps, reports and aerial photography of California, building out from Santa Barbara to other state locations.  Another equally important consideration was the condition of the original materials. Those objects in poor condition were scanned and loaded first so as not to lose any historic content.  The content is currently available on servers located in the Interdisciplinary Research Collaboratory.

Three categories of "collections" were initially loaded into ADL. They were:

For term definitions, shown in black Italics, see the glossary at the end of this document.

The ADL metadata collections included bibliographic records at the item level. This means that each data object represented in the library had its own catalog entry. As an example, each of the 65,000 topographic maps of the United States had its own entry in the catalog. These records may also have had what is termed a parent catalog entry; information that is shared in common with all data objects belonging to a single publication project. Each record described a library data object, whether online or still residing in its paper form. The ADL gazetteer, another name for a place-name index, allowed users to find earth features by typing in the name associated with that feature, e.g., find the city of Santa Barbara or find all references to the name "Santa Barbara" worldwide. The gazetteer database was also used as a stand-alone reference tool.

Initially, ADL planned to focus on California with a few other demonstration sets of other parts of the world. These California data were comprised of digital map, text and imagery files of varying detail, starting from a space perspective and "drilling-down" to detailed earth features (see footprint diagram below). These datasets are briefly described below, starting with those having  the least earth detail and proceeding to those with the most detail. In the examples below, imagery datasets are listed first, followed by mapping datasets. No example of a spatially referenced text document is supplied in this overview.

SPACE-PIX: These space-shuttle images cover selected regions of the Earth and give a synoptic but minimum detailed look at selected Earth locations, with detail at the level of cities and mountain ranges. The smallest ground detail that can be recognized is about 2 kilometers. These images differ from the following AVHRR image in that they are color and are often captured at an oblique angle.

AVHRR imagery is captured from a satellite at regular intervals during the day and night. This imagery has a ground detail of about 1 kilometer and is in black and white. Since this data was made available via ADL in close to real time, only the most current images were offered. The data was linked via ADL from a remote Internet site. It takes one or two images to cover all of California. This data could be used to observe weather conditions, track forest fires, or the effect of flooding from El Nino. 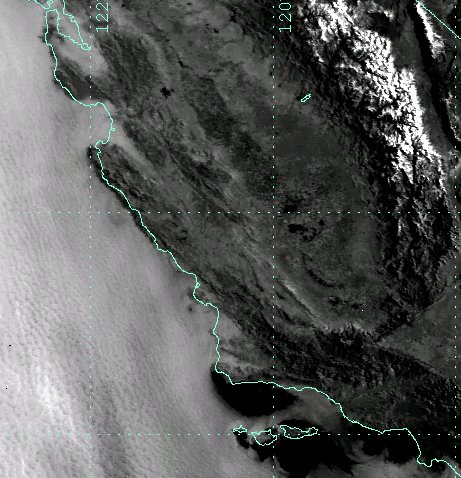 Thematic Mapper Imagery [TM] is medium scale satellite data. It has a ground detail of about 20 to 30 meters and has 7 channels of image data that may be viewed singly or in combinations. The data is used for vegetation analysis, urban planning, geology and many other forecasting and research areas. ADL had georectified tiles for all of California. Please refer to fig. A for ground-area footprint. Currently there are about 30 tiles that cover all of California. 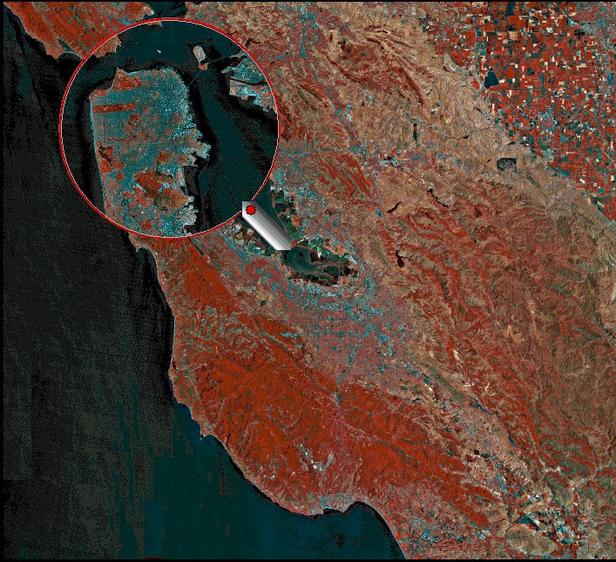 Spot Images for California are also satellite data, and ADL contained tiled images for the whole state. This data is only licensed for U.C. research. The images are black and white tiles with a ground detail of about 10 meters. There are about 185 tiles in this dataset that cover all of California. 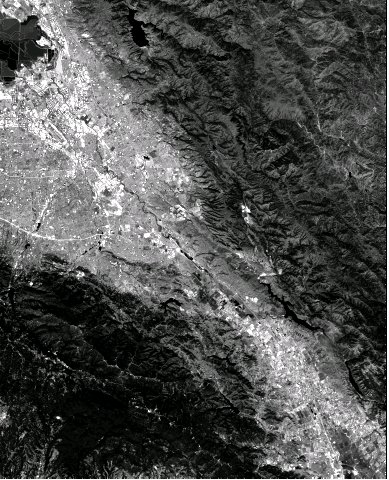 Digital Orthophoto Quadrangles [DOQ] are digital "image-maps" in that they coincide with existing printed USGS Topographic maps but reveal photographic features. They have a ground detail of about 1-meter. This imagery is georectified and can thus be used with standard USGS topographic maps. 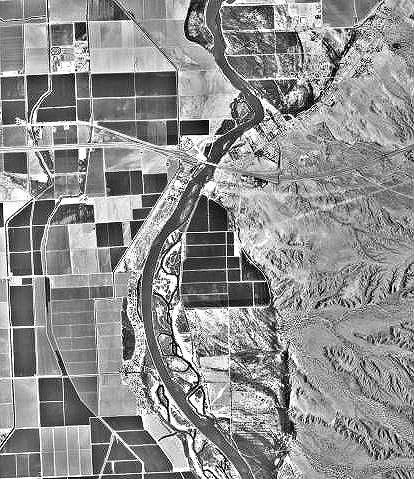 Selected detailed historic aerial photography of California was scanned for ADL. The ground detail of these images is about ½ meter. 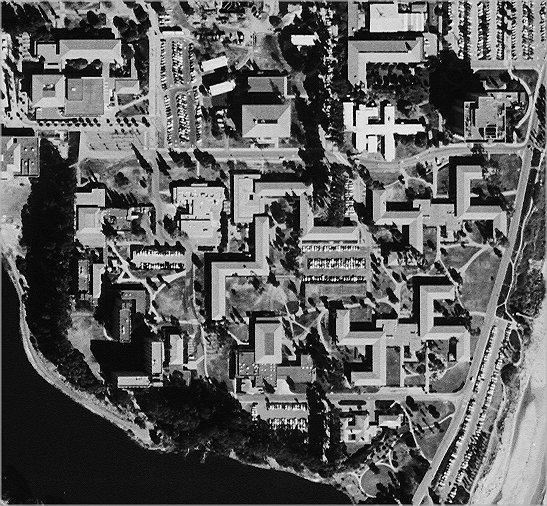 ADL also provided access to various map sets, including the examples below. Two types of data were loaded by ADL; digital elevation models (contour relief maps) and scanned topographic maps. Please refer to figs. A and B for geographic footprint information.

Digital Elevation Models [DEM] were available in two scales; 1:250,000 and 1:24,000. The former has a ground detail of about 80 meters and the latter a detail of about 30 meters. They are used for showing physical terrain and as a basic level dataset for many mapping applications. When used with Spot or DOQ images a 3D model of an area may be constructed.

Digital Raster Graphic [DRG] maps are scanned topographic maps at a scale of 1:24,000. They have a ground detail of about 30 meters and are produced by the United States Geological Survey. Each map is georectified and may be used in conjunction with the corresponding DOQ data. ADL worked with the California Teale Data Center and the USGS to make these digital maps available. 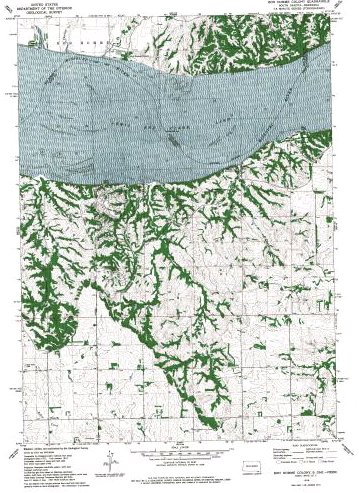 Other Datasets Loaded for Educational Instruction

CIA Country Maps: These scanned maps of various scales cover all of the world’s countries. They represent a basic worldwide dataset for educational instruction. 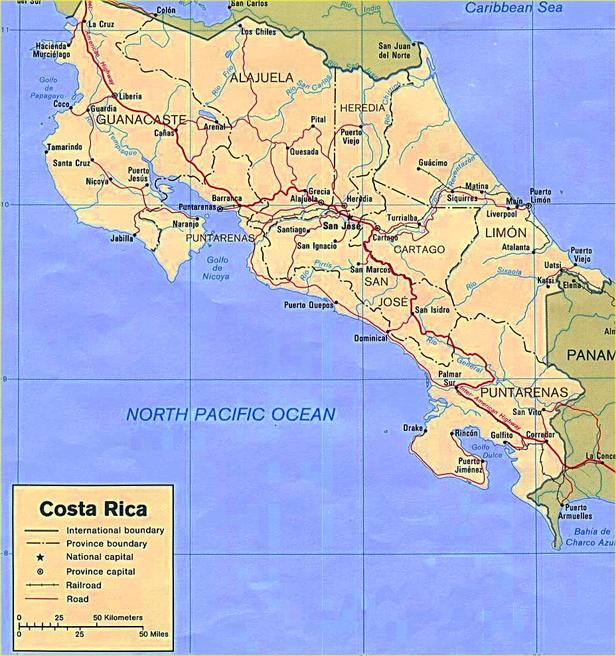