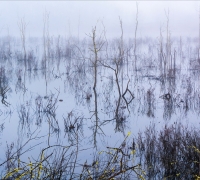 The Shadow and Light project compiled by Beau Beausoleil, a poet and activist in the Bay Area, memorializes Iraqi academics assassinated between 2003-2013. This timeframe roughly parallels the U.S.-led invasion and occupation of Iraq. To create the project, participants from all over the world selected the name of an assassinated Iraqi academic to memorialize with a photograph and a personal narrative.

For this exhibition, we selected thirteen pieces from the original list of 45 individuals commemorated in the larger project, which uses as a touchstone a list of 324 assassinated Iraqi academics. Our selections illuminate the spectrum of educators, scholars and artists lost to the violence prompted by the U.S. led invasion, occupation and resulting sectarian violence in Iraq.

During their lifetimes, the men and women memorialized in this exhibit enriched diverse fields of knowledge —from history to calligraphy to the study of bees. Each assassination represented an attack on the underlying principle of education—to share knowledge—and served as a threat to scholars throughout Iraq that they were at risk. Estimates of the total number slain run to 700+. Some of their names remain unknown.

In addition to bringing together a collection of art, this project also constitutes an archive, as both a testament to the lives of Iraqis and of international solidarity. Shadow and light inhabits these photographs, as well as stories and bits of information pieced together from news sources about each person’s life and death.

We hope this exhibit will shed light on the conditions of war and occupation in Iraq, and bring connections with Iraq to the UCSB community. We also hope these images and stories will honor educators' labor of care and intellectual bravery, and prompt reflection on how to reciprocate that care.

Shadow and Light is part of a larger project called, Al-Mutanabbi Street Starts Here, which was formed in 2007 as a book arts response to the car-bombing of al-Mutanabbi Street (the street of the booksellers) in Baghdad, Iraq.  For more information about both projects, please visit https://www.arabartsfestival.com/al-mutanabbi-street-starts-here-home/.

Immeasurable Loss: Honoring Assasinated Iraqi Academics in Shadow & Light was an event on May 11, 2021 organized by UCSB's Center for Middle East Studies in conjunction with the exhibition.