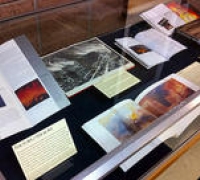 This exhibition explored the correlation between fire and art — not only artists’ explicit use of fire, but also their representation of fire through several mediums. For many artists, fire is a source of inspiration and the focus of creation using traditional mediums. Other artists use fire as a tool for constructing art itself, in the form of elemental sculpture. The juxtaposition of these two modes was intended to stimulate contrast and comparison.

A portion of the materials in this exhibition are representations of fire "in art." While some portray actual fires, each one is an interpretations. They were composed using traditional mediums, including oil on canvas, print, and watercolor.

Nightfire, 1990 by Merrilyn Duzy; Oil on Canvas, 54”X 60” from On Nature and Nation: Yellowstone Summer of Fire. The Rush for life over the Randolph Street Bridge by John R. Chapin from The Great Chicago Fire of 1871 (originally from Harper's Weekly magazine). Forest Fire II by Irma Cavat, poetry by Nika Cavat from The Braille that is Love.

The exhibition also includes material representing instances where fire is used "as art" — medium itself. The popular annual festival known as Burning Man is a notable example of fire as art, where thousands of performance art participants burn a sculpture of a man, in dedication to art and self-expression. Other artists, such as John Van Saun, use fire exclusively, as seen in this exhibition catalog. Using candles and other sources to ignite fire throughout the exhibition, John Van Saun provides viewers with several elemental sculptures.

Photo by NK Guy from Burning Book: A Visual History of Burning Man by Jessica Bruder. Photo by Unknown Artist from Burning Man: Art in the Dessert by A. Leo Nash. Photos by Gene Meyer, Detail from Sterno (L) and Empty Sterno Cans (R) from Exhibition titled “Fire” by John Van Saun, 1969.